You are here: Home / Archives for affordable online schools 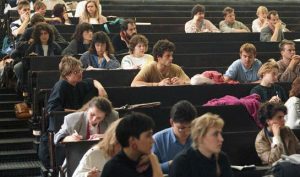 How Are Online Colleges Priced?

Students often bring unrealistic expectations about what they’ll need to pay for online college courses.. After hearing about MOOCs, some expect all online learning to be free. Others, having read about problems with for-profit schools, expect online degrees to be hugely expensive. Neither of those are necessarily true. There’s no doubt you can pay a high rate for credits at a for profit, state or private school. But if “shop” carefully among schools, the tuition for an of online degree can be kept under control.

Steer Clear Of A Diploma Mill

You should be aware that trying to take shortcuts on price can be dangerous. Getting a fake degree from a “diploma mill” or a non-accredited online school, for example, is a great way to throw away money, regardless of how low the fee is. When it comes to quality schools, the truth is that many individual distance learning courses carry fees about the same as traditional on-campus classes.

The “per credit” tuition you will pay for an online degree will, in many cases, be no different from what you would pay as a student in a traditional “brick and mortar” college. But you’ll save a bundle simply by living at home while you study. Campus-based students must spend tens of thousands of dollars on room and board over the course of their education, and non-classroom living expenses can truly skyrocket if you attend school in a major city.

If you want to study at a state, you can also get a special benefit from the “distance” in distance education. That’s because state schools have traditionally charged a big premium (sometimes almost double the basic in-state tuition) for on-campus students who are not residents of their particular state. Most state universities kept their higher charges for out-of-state online students in the early days of distance learning. At this point some, but not all of them, have now removed that premium.

Online schools also offer “per semester” tuition, which can help you save if you can study at an intensive rate. Rather than paying a “per credit” charge for each course at Western Governor’s University, for example, you pay a flat fee for each semester. If you can take more than a standard course load, you can cut down on the number of semesters you study and save a good deal. On the other end of the spectrum, if you get too busy with job and family responsibilities while you’re working on a degree and need to stop for awhile, online schools are generally open to allowing you to take a break without any financial penalty. Because they have so many adult students, online degree programs are generally built to serve people with more outside responsibilities than younger, on-campus students.

Most online three credit-hour courses charge tuition anywhere from $700 to $900 – a charge that’s roughly comparable to the fees at mid-range traditional schools. That means that a full online degree, including textbooks and other supplies needed, will probably require an investment of about $7,500 per semester, or about $30,000 total. Certificate programs, even at a fairly high professional level, can set you back less because they involve fewer courses. For example, a certificate degree in supervisory skills at Cornell eLearning, a top school, currently priced at about $5,000., requires 11 courses.

There are several ways to defray this expenses. If you’re employed, particularly by a mid to large-sized company, you may be able to get a the company to fund some or even all of the fees for your online college courses. The federal government, which has traditionally given grants only to on-campus students, has shown more flexibility in recent years about giving financial aid to online students.

Find out as early as possible in your school search what you’ll be charged for each credit hours. Also, be aware that many schools – both online and campus based – charge late application fees, late payment fees and other charges to people who apply just before school starts. You want to avoid those by getting all documents in on time. You can also help keep your degree affordable by watching out for “hidden charges” like graduation fees and other charges that don’t seem to make sense before signing on to your degree program.

Here are some of the most reasonably priced bachelors and associates degree programs, which you can get free information on by filling out some information about your interests. Estimated fees here are for the school year 2016 – 2017, and don’t include books and other feess unless otherwise noted.