You are here: Home / Blog / How hard is it to make money as a college micro-influencer? 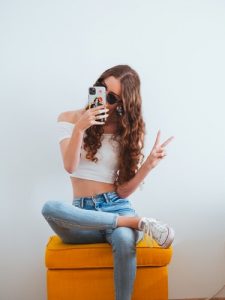 Lots of brands that have fallen out of love with advertising have now glammed into the influencer – the social media star who gets paid to recommend products to a vast number of loyal followers. An even newer flavor is micro-influencer – the guru with small number of college student followers, perhaps at only one school, — who presumably has a closer relationship with his or her “audience.” How do you become a micro-influencer and start collecting checks for your recommendations?

Influence Is All On Social Media Today

Influencers used to work mainly thru WordPress blogs. But those days are over. The game is now played almost entirely on social media. This can make it hard to get started as an influencer, because Facebook, Instagram, Tik Tok and other platforms all work a bit differently. And no matter which ones you choose, it can take a pretty significant effort to find and keep followers in a world where people are constantly jumping from one app to another on their phones.

Generally speaking, a micro-influencer will have somewhere between 10,000 and 50,000 followers. The value of an audience like that varies a great deal from platform to platform. A post on Tik Tok to an audience of that size may net you only $25., while a Facebook post may be worth more than $1,200. Instagram has gradually evolved into the platform where the greatest number of influencers post, but it doesn’t always net the highest rates from advertisers. You can find an excellent rundown of rates and posting types for influencers here.

Building Followers As An Influencer

Before getting too excited about raking in money as an influencer, it’s a good idea to think beyond the numbers a bit. If you want an audience to follow you, you better have a whole lot to say about something that interests them because you’ll need to post new content on a consistent basis. You will need to be very, very interested in a particular topic in order to be able to do that. And most importantly, you need to focus on a top area where there are lots of advertisers looking to reach people your age.

You’ll never get money, for example, writing about baking cookies, because nobody has to buy anything expensive to bake them. Cosmetics are a different story. They can cost a good deal and there are lots of companies just dying to sell them to college students. Be aware that most of the social platforms today are very picture-based. That means that if you want to be a cosmetics guru, you’ll have a much better chance of success if you’re a girl who likes to put on makeup than if you’re a football player with a beard. If you’re at the beginning of this process it’s a good idea to look around the social platforms and see exactly where other influencers are succeeding at selling products.

The good news is that if you’re a college student, you will probably be very aware of which social platforms are most popular among your friends. The bad news is that building a following nowadays is almost never free. Facebook, Instagram and just about all the other players in the market want to charge you for exposing your content to people. The costs of this can seem low at first blush, but when you consider that only a small percentage of people who see your posts will actually become followers, you’ll realize that audience building takes a sustained effort and a willingness to spend some of your cash.

Being a micro-influencer can be a nice way to earn some extra money as you work your way through college. Advertisers are interested in college influencers because they believe that young people haven’t settled on their favorite brands yet and can be convinced to try new things, The keys are to find a topic where you’ll be a good representative for key brands, and to work on building your audience consistently, but not so much that it gets in the way of your schoolwork.

How Can You Possibly Save For Your Child's Expensive College
College tuition has skyrocketed in recent years. But there are ways you can put aside enough cash to pay for a quality education for your son or daughter even if you're not rich.

Coding Bootcamp or a University CS Degree?
Bootcamps and academies advertise themselves as a cheaper, faster way to get valuable coding job skills. But deciding on a bootcamp vs a college degree isn't easy, and finding a real quality bootcamp is even tougher. How to decide whether a CS degree or a coding trade school is your better choice.

Best Free Software Apps For College Students
College is expensive, so you'll want to get as much of the software you need for writing papers and other types of presentation for free. Here's our ranking of seven free software packages you'll want in college

What Do Employers Think About Your Online Degree?
Most companies have become more positive about hiring grads that earned their diploma in a digital environment. What you need to know if you're asking do employers accept online degrees?

Switching Your Credits To A Different MSN Program
Undergrads jump from one school to another all the time. But there are some special rules you need to know if you want to transfer your credits from one nursing master's program to another.

Best Priced Online MBA Programs
An MBA degree can offer significant rewards, but it can be very expensive to earn. Here's our review of most affordable online MBA programs.

Keys To Becoming A Kindergarten Teacher Online
Choosing the right degree can be tricky. But you also need to know about state certification, student teaching and other requirements to get a kindergarten teaching job with an online degree.